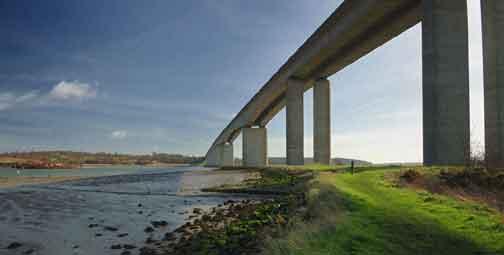 Suffolk Police & Crime Commissioner, Tim Passmore chaired a meeting with the Highways Agency, Suffolk County Council and the Constabulary today to receive an update on the A14 discussions held in November.

The key focus of the meeting was the A14 and particularly the impact of collisions on the Orwell Bridge.

“These discussions with the Highways Agency have proved to be very constructive and at last I believe they are really beginning to understand the problems that the constabulary, the county council and the wider community face when there is a hold up on the bridge.” said Tim.

“Working together to avoid collisions in the first place is key to keeping the traffic moving and I am really pleased to hear that the Highways Agency has signed up to a reduced speed limit on the bridge.”

East Regional Director of the Highways Agency, Catherine Brookes gave an update on the agency’s plans for the Orwell Bridge. She explained that a 60mph speed limit will be put in place by late summer, prior to average speed cameras at a later date. Work is on-going to consider the best location of average speed cameras. It was agreed that a decision on any changes to the slip road from the Shell garage on the west side of the bridge would be deferred until the speed limit had bedded in. It is hoped that the lower speed of traffic on the A14 will enable vehicles leaving the garage to join the flow of traffic more safely.

Catherine Brooks explained “Safety is our top priority, and we do understand the impact of a major collision on the A14 which is a vital route. We will assess the impact of the speed limits and if we feel more needs to be done we will then look at the slip road.”

Tim added, “Cutting collisions is linked to cutting speed, and I believe this proposal for a lower speed limit will improve the flow of traffic on the bridge which will have a positive benefit on the wider area.

“I believe that reducing the speed limit to 60mph and then enforcing the limit with average speed cameras would be a practical solution, and one that the majority of Suffolk residents would endorse. One thing is certain, something needs to be done and I am pleased that the Highways Agency has come back to us with these proposals so swiftly.

“I do appreciate that the cost of major works on the A14 would be significant but this is put into context if it’s set against the cost of a major collision. A collision on a major road can cost in so many ways. There is an obvious cost to the victims and their families; for anyone caught up in the congestion, there is a cost in time and lost business and there is also a significant impact on emergency services. This culminates in a significant cost to the tax-payer, which for a fatal collision can be anything up to £1.5m.

“Any hold-up on the A14 also has a huge impact on the Suffolk economy, both from a point of view of local companies not being able to carry out their business and also from a reputational perspective for visitors. “In the past I have been critical of the Highways Agency and their lack of urgency when things go wrong, but over the past couple of months I have been very impressed with the agency’s support and their understanding of the unique problems that the A14 causes us in Suffolk.”